The present beautiful and well preserved old binding from the first half of the 15th century is not only a magnificent example of the rare and sublime technique of cuir-ciselé (carved leather), but also still has its original chain with which the book was attached to its lectern in the library.

Bindings of this type with designs and patterns incised (not stamped) in the leather are exceedingly rare and mainly a specialty of Austria and other German speaking regions. Occasionally they can also be found in other countries like Flanders, Spain, and Italy. The skill was already practiced in the 7th century but seems to have been forgotten until it experienced a renaissance from the 13th century on. It could be applied to various objects made of leather, like containers of writing equipment, for liturgical objects, pilgrim's boxes, even parts of a suit of armour and, in our example, the binding of a book.

The advantage of this carving technique is obvious: no intricate tools like stamps and roll stamps, which were difficult to produce, were needed. Carving tools and one or several punches to hallmark the receding parts sufficed to create an infinite variety of designs and patterns. 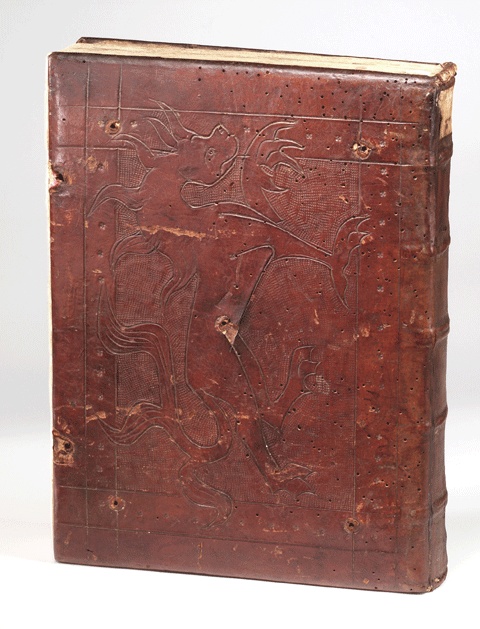 Some researchers assume that these designs were not provided by bookbinders but by independent craftsmen who were specialized in carving or engraving in various materials. Sometimes they even seem to have been travelling artisans who were temporarily employed by the bookbinder's workshop.

The cuts and incisions were applied to damp and warmed up leather. The cut-out sections were – like in our example – often given a grainy structure by embossing it with tiny metal tubes. In our present example the design is consists of tendrils with differently formed fleshy leaves.

Since bindings serve not only as decoration, but primarily as protection for the book, they were constantly handled, opened, closed, carelessly bent, and consequently broken by their users. Many were substituted by newer, not always equally beautiful replacements. It is a happy circumstance for every book lover to find a binding that is still almost in its original state.

But the cuir-ciselé technique is not the only remarkable aspect of this binding. That its original chain is still attached is equally appealing. Many libraries in the Middle Ages had the inclination to fasten their treasures to lecterns in order to prevent disorder or even theft. Apparently not all the users of ancient libraries were beyond all possible doubt – some things never change! – and it was safer to eliminate all temptation. Actually, the books remained somewhat mobile because the chains were attached to a metal bar on which it could be moved sideways.

To make this book even more thrilling, a criminal case is associated with this manuscript. This exciting story will be revealed in my next blog!
Share This Page